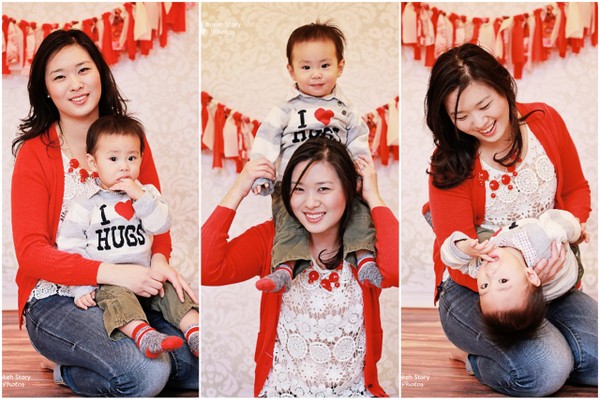 I know Fridays aren’t the best days for heavy posts, but I wanted to share a little bit about what is going on in our lives right now.  From birth until now (13.5 months), Austin has been under the care of grandparents (both sets alternating months) who have lived in our house.  Neither sets of parents live in the same state as us, so they’ve both so graciously put their lives on hold to fly to stay with us and take care of our little guy.  Austin loves all 4 of them so much and they give him the best care ever.  They are the first faces he sees when he wakes up in the morning, they read him books and sing him songs, they teach him Chinese, they hold his straw cup for him because he is lazy to hold it himself, they chase him up the stairs and around the house while trying to change his diaper, they hold him when he doesn’t want to be on the floor, they cook yummy foods for him every day like chicken and spinach and tofu and cut up fruits for him too.  Not only that, but they care for Marvin and I as well.  They cook dinner for us every weeknight, they hem pants for us, they teach us how to be parents, they allow us to sleep in on the weekends, and let us go out for dinners alone or for outings with friends.  We have been truly lucky.

But next month, all of the grandparent help will end and Austin will soon need to go to daycare.  We’ll be spending a heck ton of money every week, we’ll have to wake up earlier, get home earlier to cook, I’ll have to be the one teaching him Chinese (although mine is not that great), and we’ll have less time and money for other things.  Austin won’t get the individualized care that he is used to and he’ll have to learn to grow up pretty quickly.  Austin definitely still has stranger/social anxiety, but we think daycare will be a good thing for him… for him to see the world, meet some new friends, experience what life is like on the outside.  It’s a scary thought, for all of us, but this time would have to come sooner or later.  Sometimes I wish he were just a baby again so I could hold him and cuddle him and kiss him without him crawling away from me, but it is time to let him explore and let go of my hand a little bit.  We’re in the process of picking/narrowing down daycares now and it’s sooo tough.  There’s two we really like but are quite different, so it all just comes down to which one to pick!

And I just bawled all over the keyboard.  I better save these tears for next month, because there’s going to be a lot of them.  Any tips on making the transition to daycare go more smoothly?

P.S. For your viewing pleasure, here’s a little video of Austin blowing kisses to everyone.  He’s gonna be a little heartbreaker. 😉