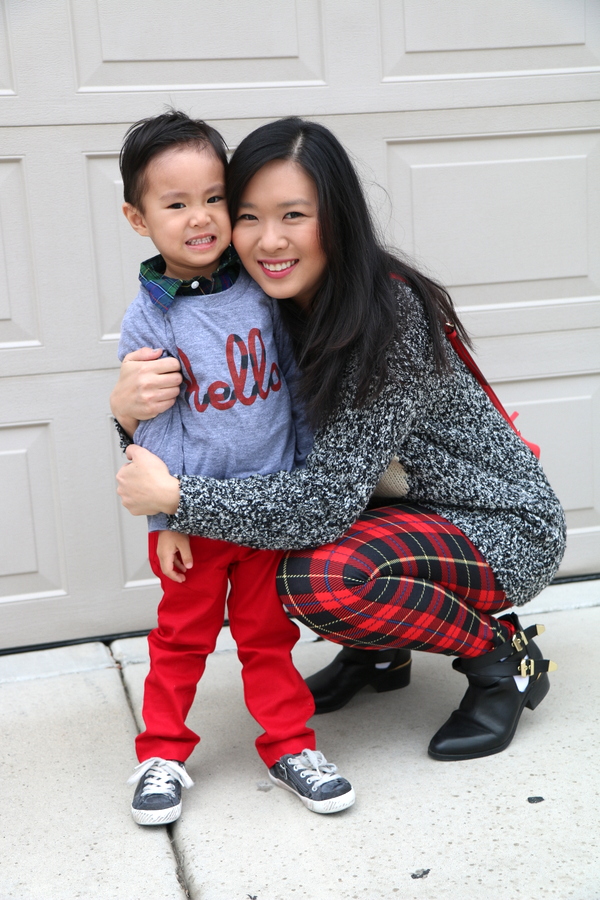 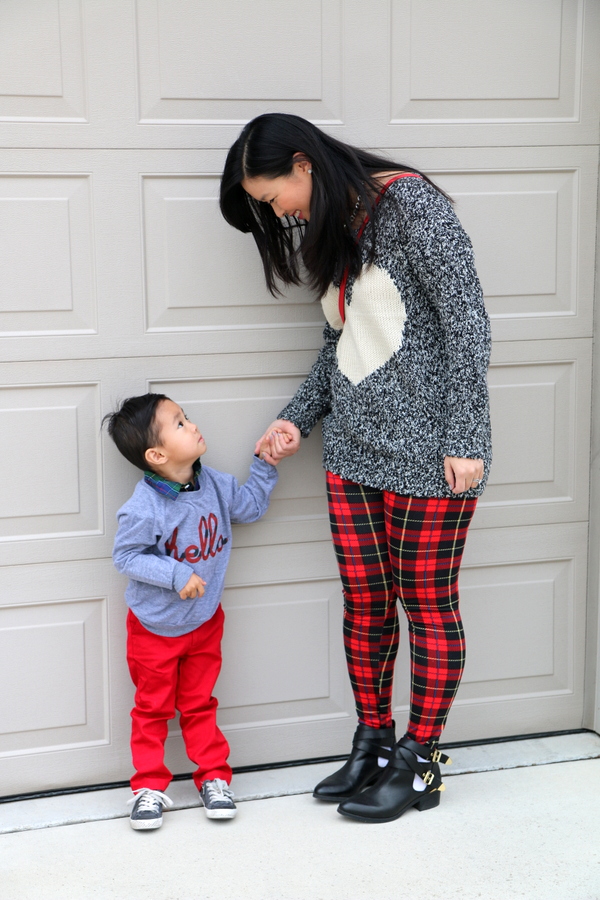 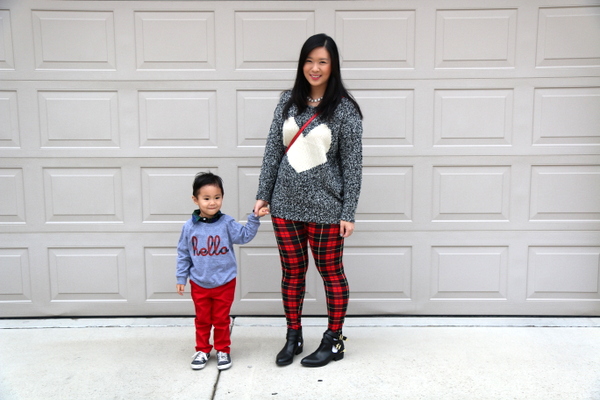 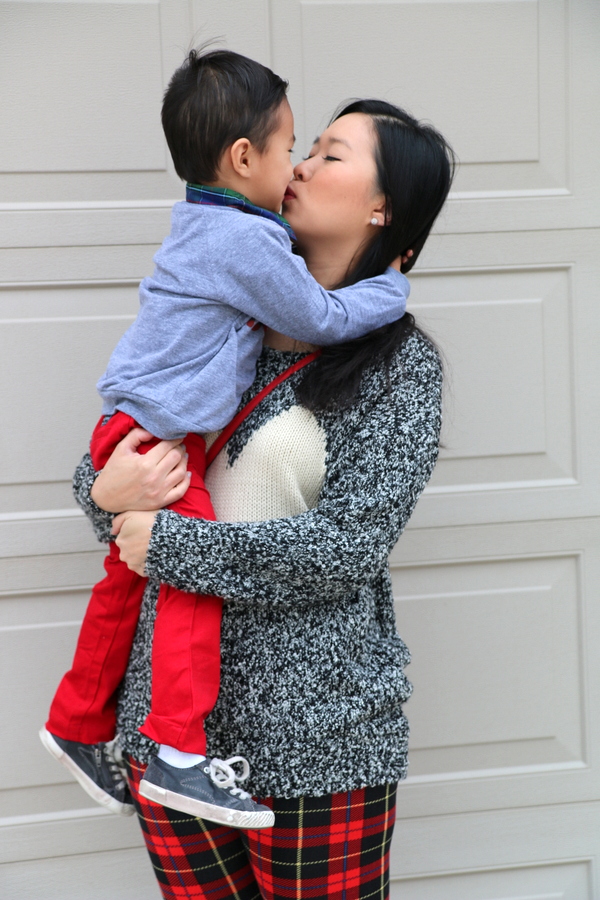 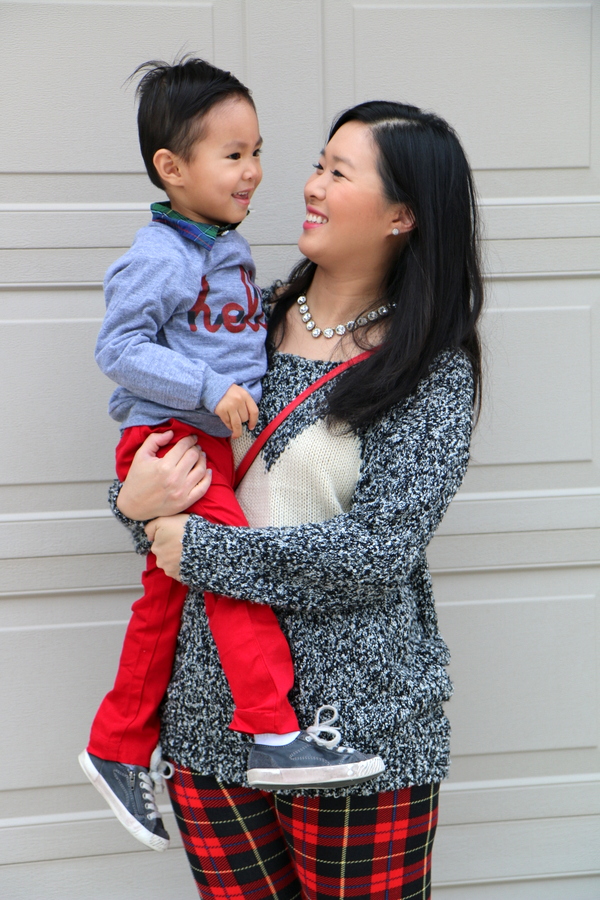 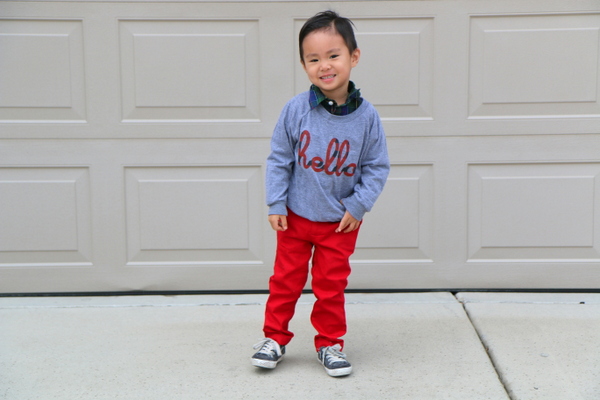 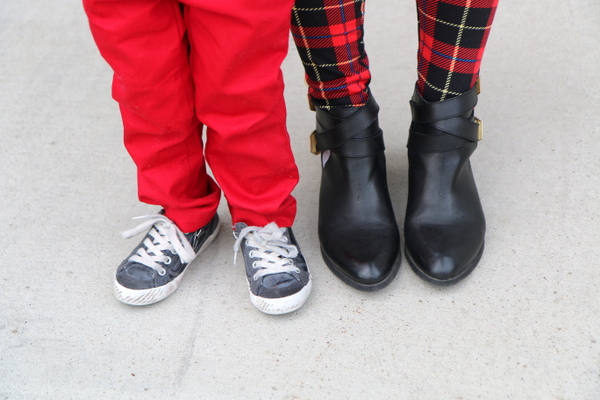 So on this day that we wore these outfits (it was this past Saturday), it was quite the busy day.  Austin woke up at his normal 7:30AM time (he does not know how to sleep in on the weekends) and his grandma and grandpa went up to play with him. The baby girl and I slept in a little until 8:30AM before waking up. I had plans today to go to a local mall to make some returns, buy some things and last minute I decided that I wanted to get Santa photos taken for the kids. You see, back in Kansas City, our company would always have a fun kid’s holiday party with the opportunity to take free pictures with Santa, but this year, we would have to do like others do and take pictures at the mall.  And I figure that it was Vivian’s first Christmas, so we needed to document it. Anyways, we got all ready in the morning, took these above outfit pictures (I made sure to match Austin in case I would need to be in the Santa picture with him).  You see, I know my son well and know that he would be afraid of Santa because he is always so anxious or scared about “new” experiences or “new people”. We have practiced this at home, the whole Santa dialog while my husband “plays” Santa. “Ho ho ho, what would you like for Christmas?”  In which Austin replies, “cars, trains, candy, books, couches, oranges, etc.”.  Kind of random, I know.  So it always takes us many hours in the morning to get ready, but we finally left the house around 11:30AM.  We drove in our minivan to the mall and parking was a beast but we managed to find the spot.  This was a new mall to Austin and it didn’t have a choo choo train like the normal mall we went to, so that was toddler tantrum battle #1 that we had to overcome.  He kept asking for the train, again and again and again, in which our response is, “we will have to look for one, not sure if there is one”.  After awhile, we found the Lego store that occupied his mind and got him off of is “where is the train” thought.  And then next up, were Santa photos.  There was a line of about 20 kids ahead of us and Santa was on lunch break, so as my husband and daughter stood in line, I took Austin to get some almonds and pecans to fill him up a bit before meeting Santa.  I knew that if he had gone hungry, that would have been bad.  About 30 minutes later, we were second in line to meet Santa and Austin started to freak.  He said, I don’t want to see Santa, I want to get out of line, anything and everything he wanted to leave.  I asked him to take off his coat numerous times and no dice.  Finally, we were up and Vivian was placed nicely in Santa’s arms and got a few pictures… then I picked up Austin and set him next to Santa and the crying ensued!  I placed him there, hopped out of the picture and CLICK!  I’d say we’ve got one of the most epic Santa photos of all time and I can’t wait to show these to his future wife!  😉

It took a few minutes for him to calm down and we headed to a shoe store for me to do some shoe shopping and wow, this kid was a completely different child.  He was hyper, happy, asking where Santa was, and all smiles.  There was a Santa outside that store that gave him a candy cane and instantly he wasn’t so scared of “Santa” anymore.  Then after that we went to eat at the food court before heading home.  As we were leaving through Nordstrom Austin saw the escalator and demanded to ride it.  Although he still wants me to hold him during the ride, I usually just pick him up and set him on the escalator with me.  We went up and down two times while I explained the second time was the “last time” and once we were done I said we had to go to the car and go home.  Toddler tantrum battle #2… well probably #3 (Santa pictures was #2) began.  He wanted to go back and ride it again… and again… and I just had to pick him up kicking and screaming and run to the car and buckle him in.  He cried the whole way home and kicked the back of the seat, which made Vivian cry all the way home too.  That was fun to say the least.  Once we got home he was taken up to his room by his Daddy to go take a nap and suddenly he was finally in good spirits again.  It was a short nap as we had to head to a friend’s house.  Once he woke up, we got in the minivan and he goes “I’m not crying for the escalator at the mall anymore, I am a good boy, last time means it’s the very last time and no more”.  🙂

I don’t usually write stories like these on this blog, but I want to start doing so more.  Documenting the every day moments are what life is all about and I don’t want to forget any of it.  We are facing some tough times with the toddler tantrums, but it’s great to see Austin grow and learn as well.

By the way, the other night I went to a blogger event with some girls at Chic Style Utah where I picked up my legging and Austin’s shirt!  For those of you who are local to Utah, they have stores all around the Salt Lake area that you must check out!  I love that they have fashionable items for women as well as children and each store carries a different variety of brands!  I can’t wait to go check out the other stores and see what kind of items they will have after the holidays.