This post is sponsored by Revolution Math, an interactive online math tutoring program that really makes math fun and interesting for school aged kids, all opinions expressed are 100% my own. 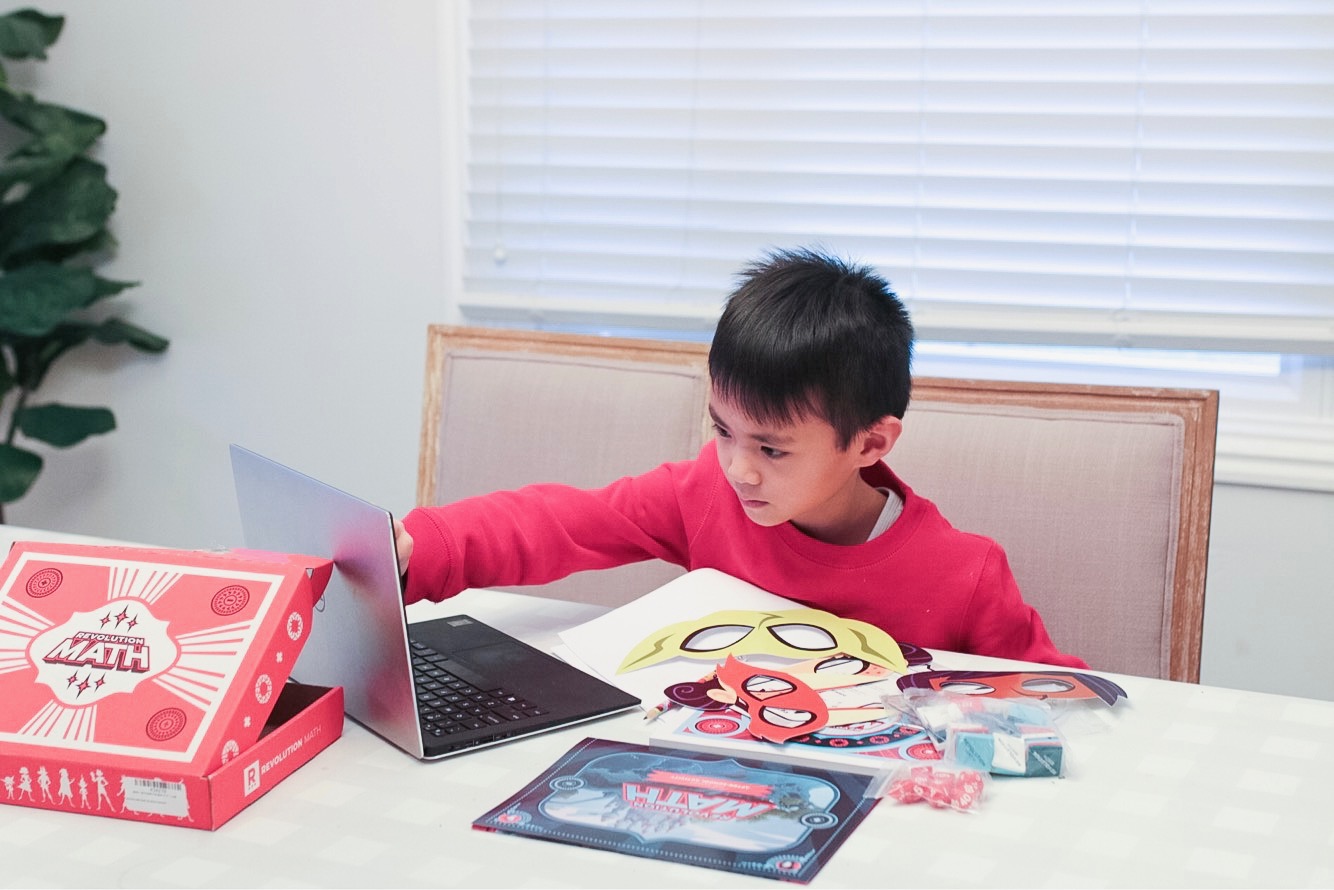 A couple weeks ago, we started my 7 year old son, Austin, in a one day a week after school program called Revolution Math. Because Austin’s school gets out way earlier than when Marvin and I get off work, we are constantly trying to make sure he can keep busy after school until we can get off work. When I first told him about his class, he was actually very excited about, which isn’t surprising, because he LOVES MATH!  He would honestly be a happy camper if he could be quizzed on math problems all day long… But let me tell you, the way kids are learning Math these days is WAY different than the way I learned growing up. Their math is always through word problems and the way they are taught to add is something I am still trying to learn from Austin. KEEP READING FOR A SPECIAL COUPON CODE TO GET 4 CLASSES FOR $1!

What is Revolution Math?

Revolution Math is an online class for grade levels 2nd – 5th that teaches kids math in an interactive, really fun way!! Austin is in 1st grade but is in enrolled in the 2nd grade level as he does have strong math skills. They teach Math through a story based curriculum and it aligns with common core which is what Austin is learning in school. They have a teacher every week and up to 4 kids in the class at a time that you video chat with. They also send out a progress report after each class which is awesome. But the best part of all, is that we can do it from the comfort of our own home! 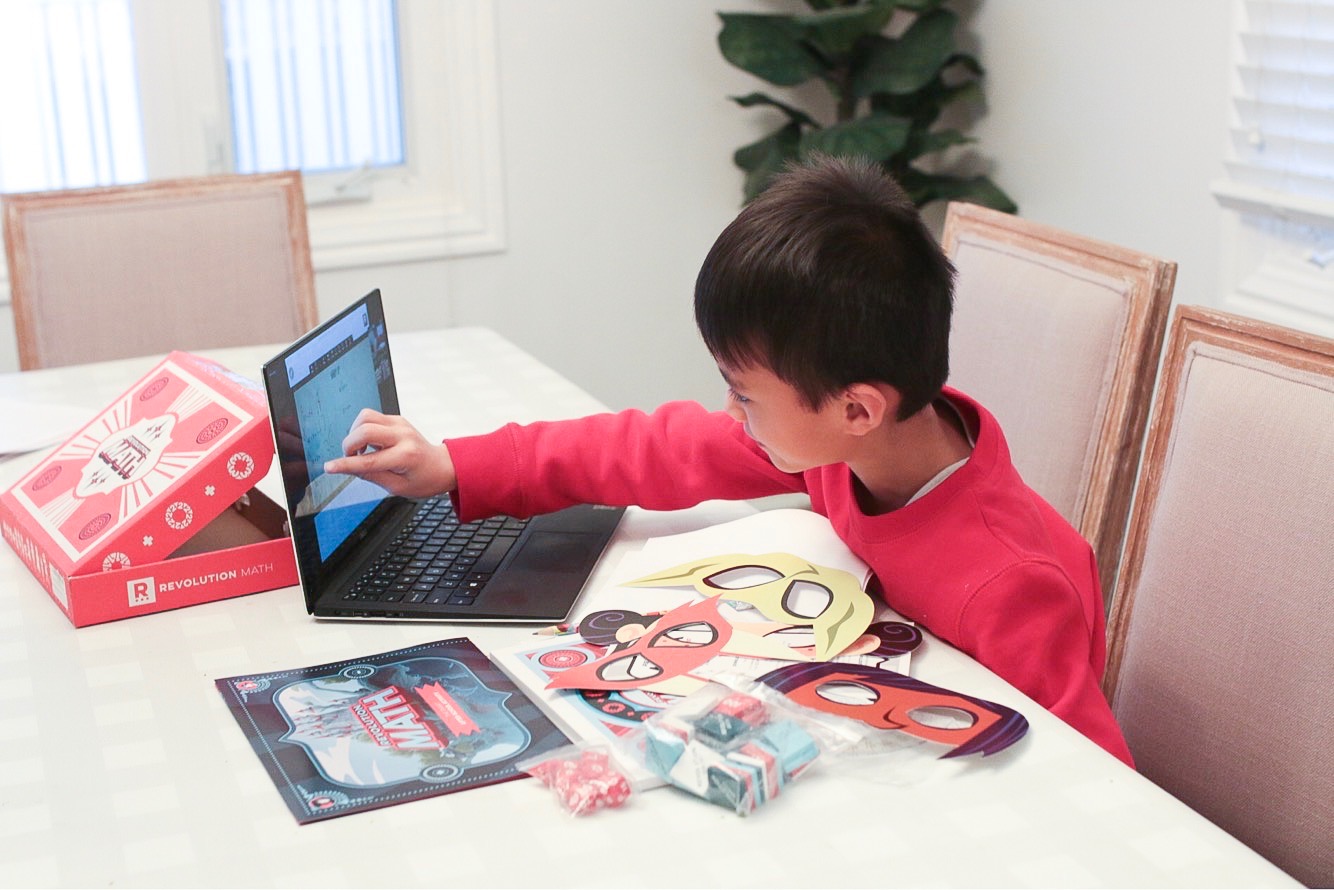 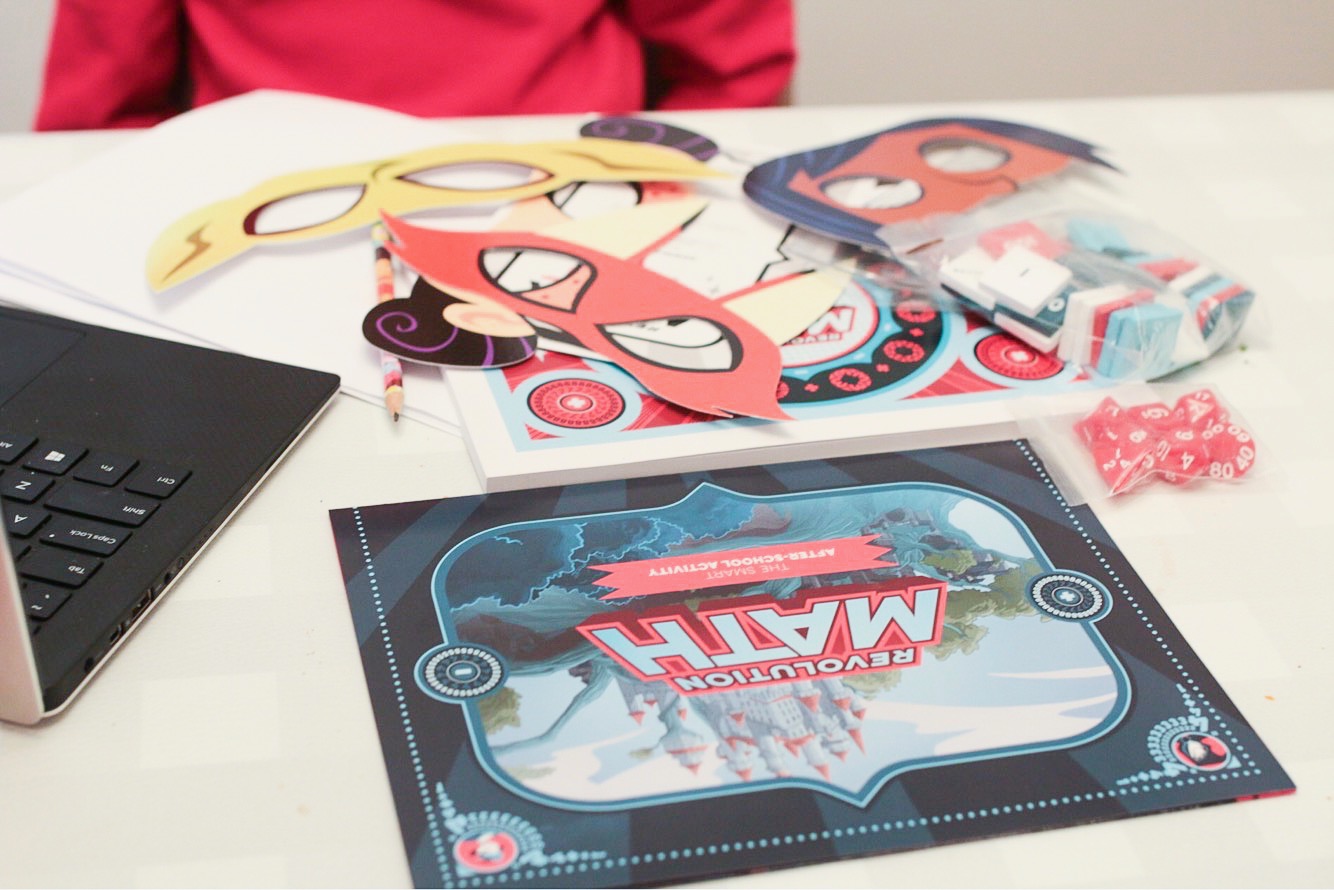 What materials do you need?

A week or so before the class, Revolution Math will send a box of materials to be used for the class. It’s an assortment of masks, dice, graph paper, tiles, everything that is needed to supplement the online tutoring course. And then of course you will need to have a desktop/laptop for your students to use for the class. Since we have a tablet with a touch screen, he is able to interact, draw, and write right on the laptop screen which is awesome. It is all done through Zoom, a free program you will need to install before the class starts. Also, they make it really fun where the kids can earn prizes as well! Also, just make sure you have a strong internet connection, as we had some troubles at the end of the 1st class with the program freezing up, but for the second class, we moved our router closer to the table where Austin takes his class. 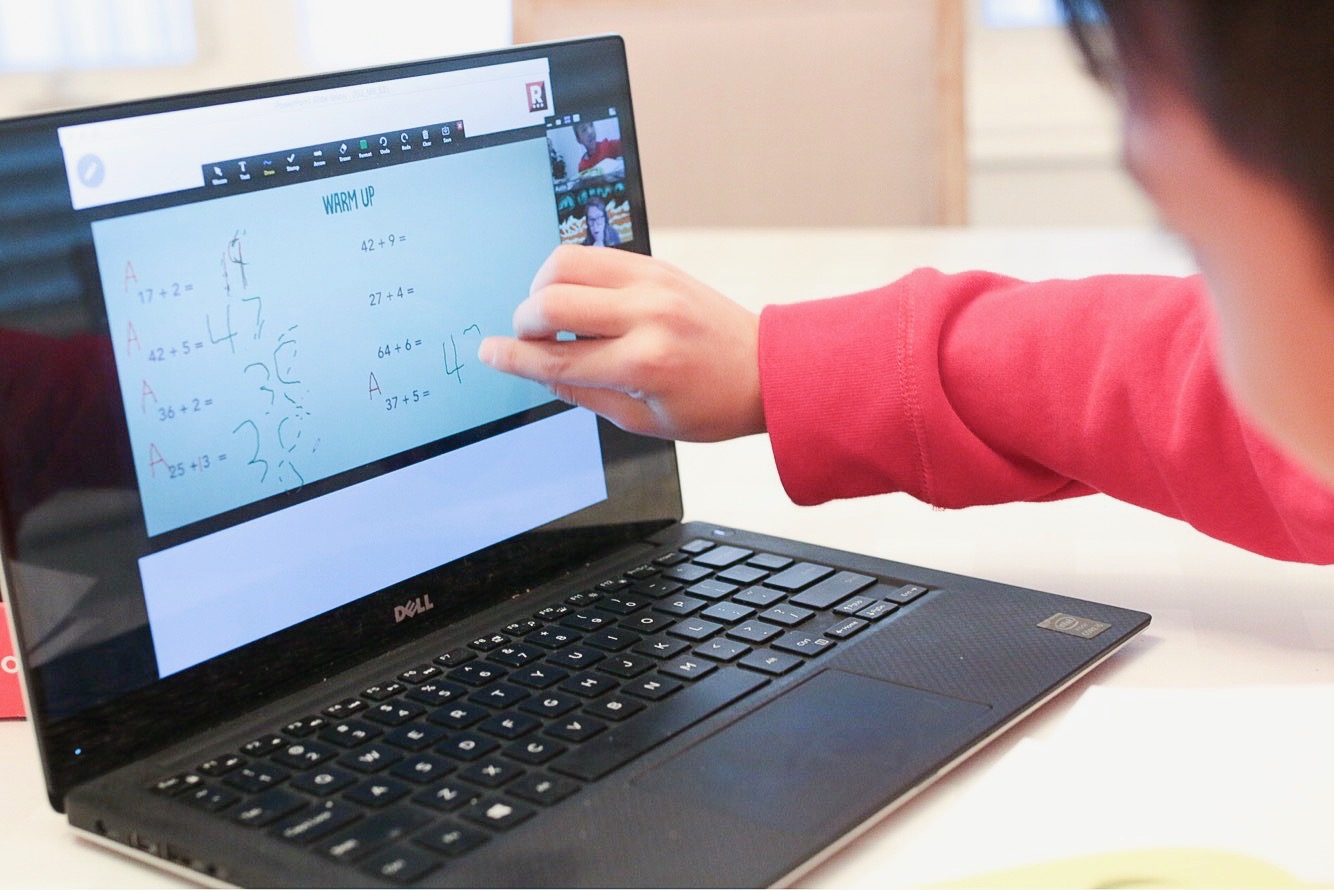 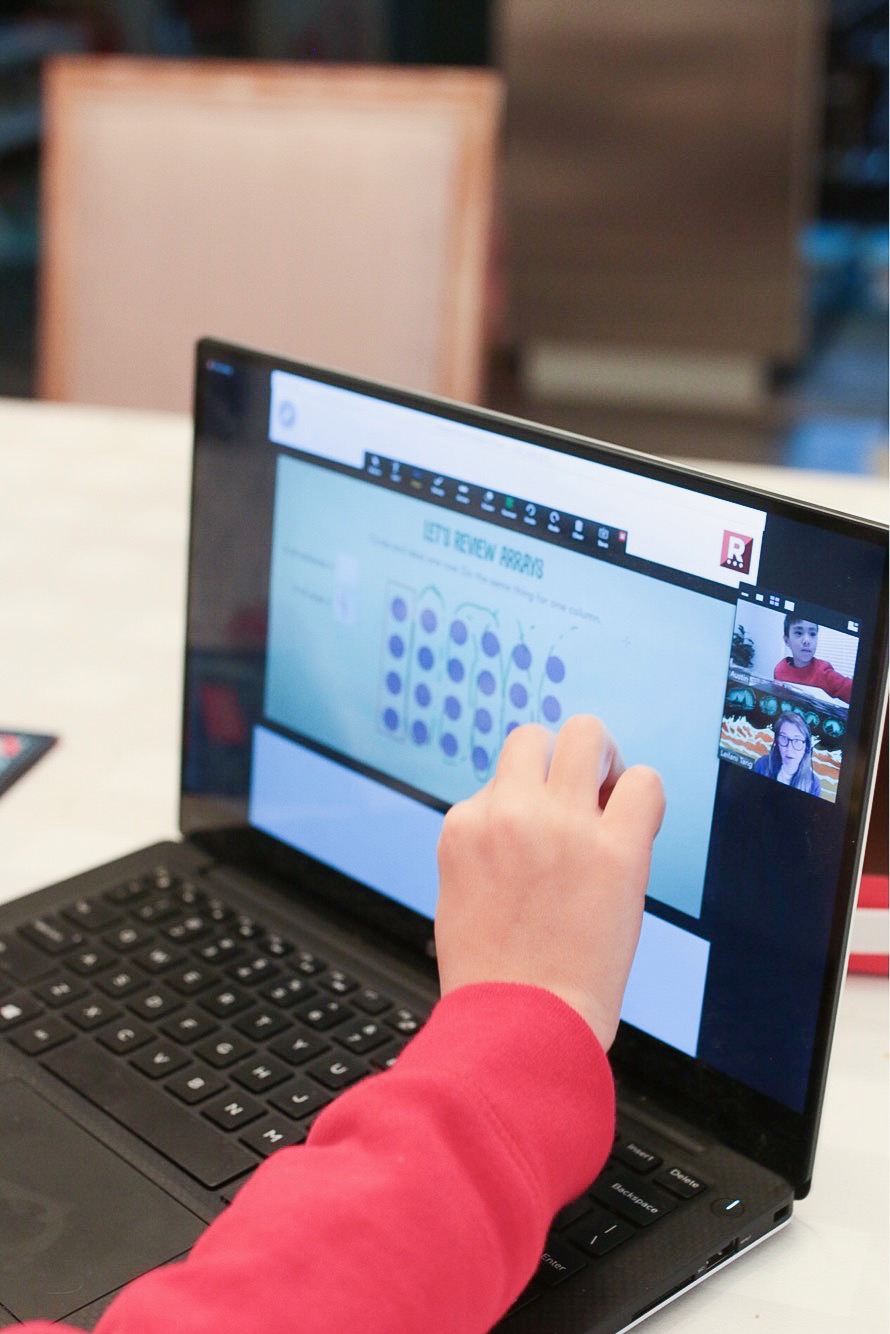 What does Austin think about the class?

You guys, he LOVES it. He looks forward to it every Tuesday and although he was definitely timid at first, he really opened up to the teachers. Before bedtime, I would reinforce some of the topics with him and I could tell he is really soaking up the new information. His first few classes had a super hero story that went along with learning about rows, columns and arrays!! And his second class he learned about even numbers and the patterns related to adding even and odd numbers.

Here is a sample of the report that his teacher Leilani sent us from his first class:

This week the Order continued their adventures through the dark caverns and used repeated addition and arrays to put together Pilea’s map and dodge falling boulders! Exciting!

Austin had a great first session! His initial timidness quickly disappeared as he became more comfortable navigating the program and reading for his character, Britt! He showed a great openness when it came to reinforcing concepts he was familiar with and flexibility when it came to expanding into newer areas that built from previous understanding. One example was when he took his understanding of rows and applied this to columns. He then used the same strategy of repeated addition to find the total sums for equal groups. Austin also showed awesome mental math flexibility, solving for sums and using previously learned strategies.

During the session, Austin made arrays using the areas tiles. I’d suggest playing with these over the week to reinforce concepts. Give him a total number and have him make equal groups for that total. Once he finds a rectangle, have him find another for that same total (ex. total of 16 tiles can be 4 rows of 4, 8 rows of 2, or 1 row of 16). It should be fun!

Thanks so much and way to go Austin on the completion of your first session! 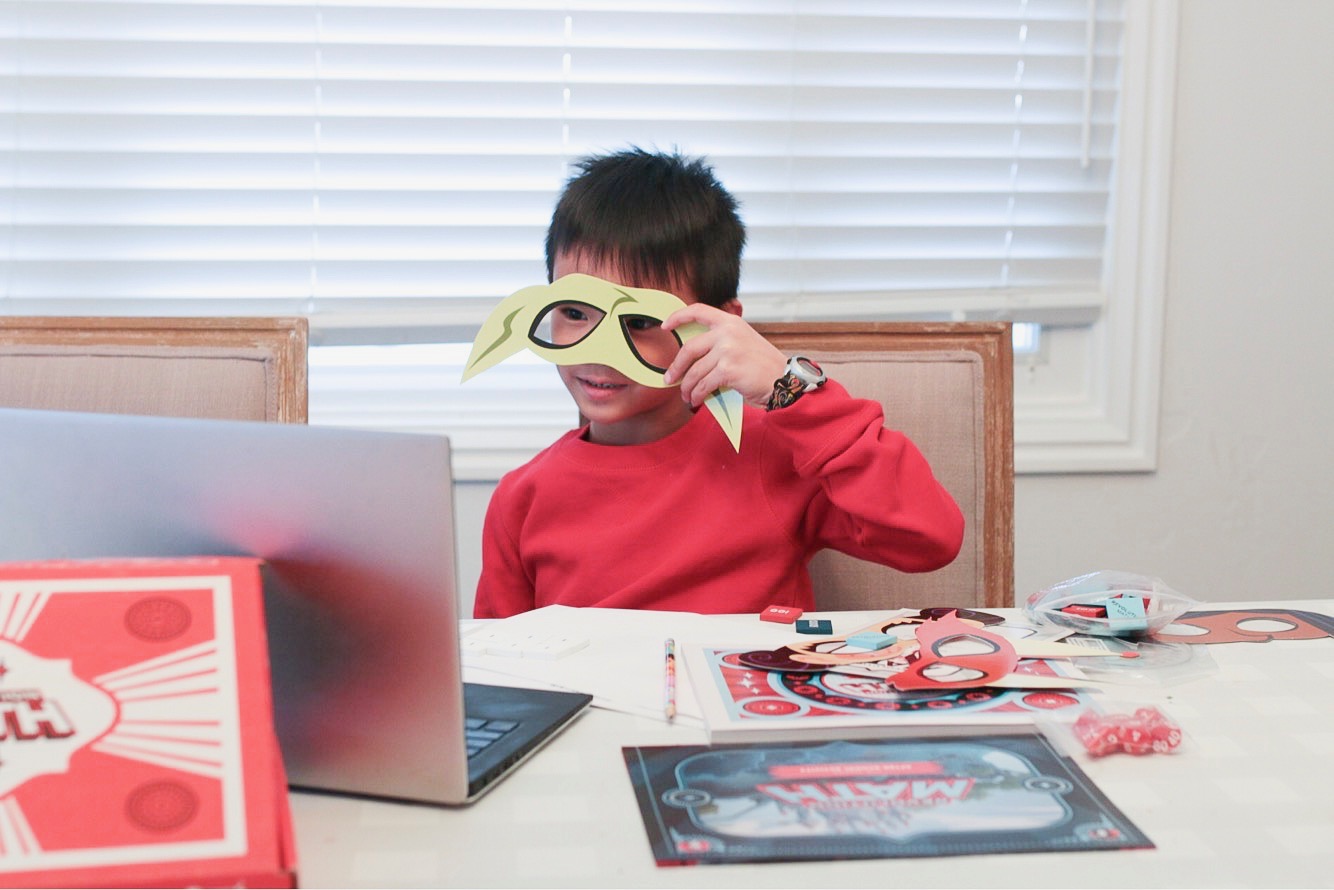 What is the cost?

Well, first of all, I have an exclusive offer just for you guys. You can use code SANDY1 to get FOUR tutoring classes of Revolution Math for just $1. This code expires on March 31, 2019 so you will want to act fast! After the trial expires, you can sign up for $99/month at an annual rate or $149 monthly.

Who would this class be best for?

If your child needs some help in math, if your child loves math and just wants more of a challenge, if you are looking for an after school program that you can have your kids do from the comfort of your own home, definitely check this program out!