When I am not at work, blogging, hanging out with friends, or running errands, there’s one other little big activity that occupies my husband’s and my time… renovating our basement.

Ironically, when we first bought the house, the basement started with an already-finished basement.  Sure, when we moved into the house, the basement had outdated wood paneling, dreary lighting, and icy (both in color and feel) blue sticky tile flooring.  But it was fine. It was low on our totem pole of things-that-we-need-to-do-something-about.  So what rocketed a basement renovation to the top of our To-Do list?

It started with a tiny puddle on the basement floor.  The puddle was so seemingly innocuous, as if it came from a careless bump of a hand carrying a too-full glass of water.  But, as Kansas City’s storm seasons brought rainstorms of increasing might, so followed more water into the basement, seeping in through cracks in the foundation walls.  Watching the sheets of rain falling outside my cube window brought such anxiety.  Did I put enough towels down on the floor this morning?  If I drive home now to check the basement, can I make it back for my next meeting? The rumble of thunder during summer slumbers used to be a soothing sound.  When you have water seeping into the basement, it becomes an ominous alarm clock.

After numerous nights of mopping and bailing water, we decided that our finished basement had to become unfinished, to make way for foundation repairs.  Once we were satisfied that the basement remained bone-dry even after the fiercest of rainstorms, we decided that we needed to refinish the basement.  And thus was born The Basement Project.  Our goal is to put a big, fat line through this To-Do by June 2010.  Come see how we’ve done so far….

Before
(Note the wood paneling among the guitar shredding) 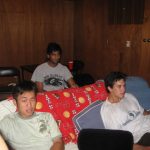 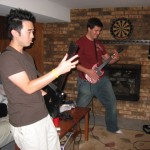 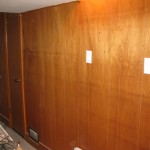 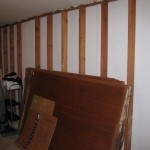 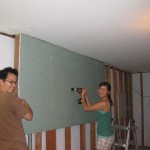 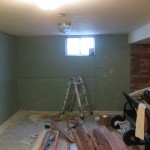 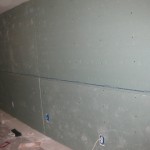 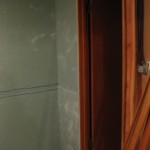 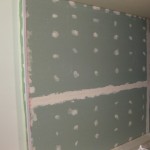 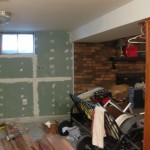 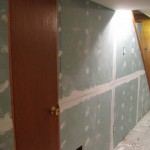 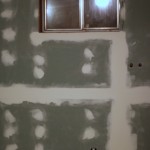 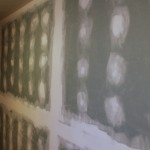 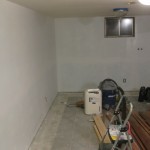 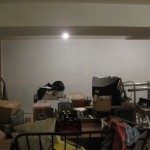 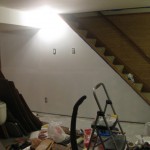 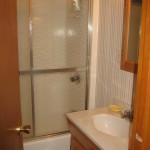 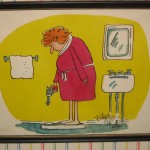 (The previous owner had this hilarious picture above the toilet…shame that she took it with her!) 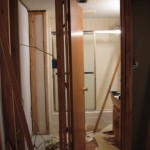 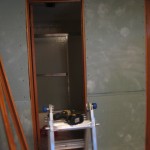 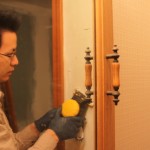 I’ve never really been one to have an eye for interior decorating so this is where I’m going to have to call in reinforcements, i.e. YOU!  I’m most likely going to be posting some more on interior designs, furniture, color schemes, etc. (taken from the blogging world, websites, magazines, friends) that I hope to use in my basement or just inspiration that I love!  I think the first thing I need to decide on is a basic theme for the basement (Vintage?  Modern?).  *sigh* It’s so hard!  As for colors, I’ve decided that I want shades of yellow to be the color that ties together the main basement area and bathroom…and that’s pretty much as far as I’ve gotten.